Yes the Beavers ended their consecutive streak of Pac-12 series victories at 14. They also dropped out of the #1 spot in the D1 poll after losing two of three in Salt Lake City. But no time to cry over spilt milk. The Wolfpack of Nevada-Reno are in Corvallis for a rare Monday-Tuesday series. Pregame coverage on 103.7 the Legend at 6:pm. Here are some cool stats from the OSU baseball website.!!

Last GameCadyn Grenier went 3-for-5, hitting a home run, and Trevor Larnach and Adley Rutschman both drove in two runs but Oregon State lost to Utah, 11-8, on Saturday in Salt Lake City. Larnach doubled twice, and Andy Armstrong tripled and went 2-for-5 with a run-scoring triple.Armstrong Pushes AheadAndy Armstrong extended his hit streak to 13 games with a 2-for-5 effort on Saturday. The sophomore is 18-for-45 (.400) with seven doubles, a triple, home run and 12 runs batted in during the streak. Rutschman And LarnachThe duo both finished with two hits Saturday. Adley Rutschman leads the team with 12 multi-hit efforts this season while Trevor Larnach is second with 10. Rutschman has equaled his total from last season, while Larnach is five shy of his only 25 games into the season.Against NevadaOregon State and Nevada are meeting for the first time since 2012 when the Beavers swept a two-game midweek series in Reno. OSU, which has won three straight over the Wolfpack, hosted Nevada for three in 2006, winning 13-4, 4-0 and 8-1. The Beavers have won 10 of the last 11 matchups between the teams.On To AprilOregon State finished the month of March with a 13-4 record, putting the Beavers above .500 for 25 consecutive months. Oregon State has posted winning Aprils for seven consecutive years, going a combined 77-29 (.726) over that stretch.Singles• The games versus Nevada are in the midst of an 11-game stretch where the Beavers will play nine on the road. OSU's next home games after Nevada will be April 19-21 versus Oregon.• Oregon State is 24-1 (.960) over its last 25 home games versus non-conference opponents since the start of the 2017 season. 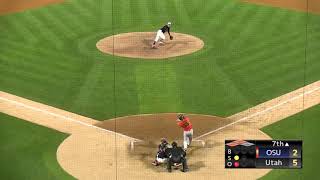 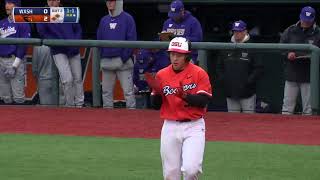